If someone told you they were going to sail a dinghy from Lands End to John O’Groats solo handed, you would think that  person is either crazy or inspirational.

We think Ken Fowler is inspirational especially if you sat down with him for half and hour and let him explain the reasons behind this epic adventure.

25 years ago Ken lost his father to cancer since then Ken has been doing various fund raising activities to raise money for Cancer Research, the first thing he done was to cycle across America with one of his friends, Ken said it seemed a good idea at the time. Moving forward a few years  Ken obtained a small dingy from another friend and started learning how to sail and found he enjoyed the open waters.

In June 2015 Ken decided to sail around the Isle of Wight for charity but sadly just before he was due to sail his Mother in Law suddenly passed away and Ken was so upset that the Isle of Wight adventure was at risk of being called off.

But Ken’s Mother in Law was so supportive of all his fund raising antics he decided to go ahead with the trip, and he placed her photo alongside his Dad’s photon on the side of the dinghy, Ken recalls that those moments were so emotional and motivating at the same time, which in turn helped him to complete his mission in just over 12 hours, and when he returned back to Medford were he lives there was such a huge crowd to welcome him home and he raised a whopping £5.000, and someone joked saying what’s next Ken are you going to sail around England.

Joking aside, that got Ken thinking, he could not sail around England as he would not get enough time off work as he works as an Air Traffic Controller at Swanwick near Bursledon, Hampshire.

But it was possible to sail from Lands End to John O’Groats and that journey has only been done once before and when Ken completes his journey he will have broken the record for the smallest and fastest dinghy to have do so.

This is what Ken says about his epic adventure and the charities he is raising money for.

The aim is to sail from Lands End to John O Groats in a dinghy smaller than two bathtubs to raise £50,000 for two amazing charities, Cancer Research and Oakhaven Hospice. If I am successful I will become only the second person to complete this epic journey in a single handed dinghy and break the record for the smallest and fastest dinghy. I will be sailing alone for over 900 miles, spending 10 hours a day on the boat.

The journey will take me up the West Coast of Britain starting in Cornwall and then sailing across the Bristol Channel to Wales. From here the route will take me up to Anglesey and then across the Irish Sea to the Isle Of Man – a big crossing for such a small dinghy. From the Isle of Man I’ll be setting sail for Scotland and then making my way past Mull, Skye and the other scenic islands of the West Coast.

Along the route I’ll be facing strong tidal races, big waves, whirlpools and at the end of the day the challenge of finding a surf battered beach to land on. Not for the faint hearted!

My boat is an RS Aero – a high performance modern dinghy which is about 4 metres long and weighs 30kg – about the same as a Labrador! There are no home comforts on board and most of the time half my body will be hanging out of the boat to keep it upright!

Being out there in this challenging environment means safety is a priority so I’ll always have on my buoyancy aid and an emergency locator beacon – just in case. I’ll also be carrying a VHF radio, mobile phone and a “live GPS tracker” which let everyone know my location every 15 minutes – you can follow this on the website.

Land support will be in the form of my 20 year old campervan “Snowy” being driven by two good friends Ian and Jane Pike. They will be following me along the coast monitoring my progress, identifying the best landing location for the day and helping sort me out at the end of the day with accommodation and food. Basically they’re going to be very busy!

You can follow Ken’s adventure every step of the way by tracking him on  daily through his website once he has launched www.raceforscotland.co.uk

We wish Ken all the luck for this amazing adventure and hope he breaks the record and his £50.000 target. 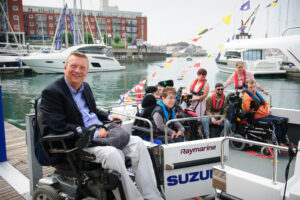 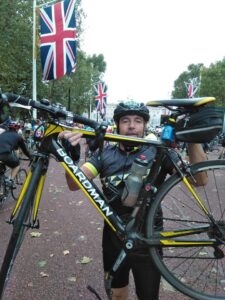