Saturday’s loss to Wigan Athletic saw Pompey’s worst start to a League season since the 2016/17 campaign. In fact, that year, the first 3 games comprised 2 draws and a defeat, totalling a modest 2 points from a possible 9 – the same as this season. The only hint of solace and silverlining could be drawn from the fact that Portsmouth did win League Two that season, albeit in the last match of the campaign.

Fratton Park saw two familiar faces return in the opposition kit. The first, Viv Solomon Otabor, played in 10 games for Pompey and contributed with 1 goal during his loan spell from Birmingham City in 2019.

The second was Kal Naismith, who made an impressive 94 appearances, scored 21 goals, contributed 16 assists, and even offered a 5 minute spell in between the sticks when loanee goalkeeper Stephen Henderson was stretched-off towards the conclusion of the game.

Wigan came into the match at Fratton Park brimming with confidence from their 6-1 dismissal of the Liverpool U21 side earlier that week in the EFL Trophy. Pompey on the other hand were looking for their first win of the league season.

Kenny Jackett handed new signing Michael Jacobs his full league debut in a Pompey shirt. The ex-Wolves midfielder took up the central attacking role, previously occupied by the recently departed Gareth Evans. A number of attacks were led through the middle by Jackett’s side however, none coming to fruition in the first half.

The best chance of the first half came when Curtis won possession of the ball on the right wing, and swung the ball into the box, dangerously close to the goal, and subsequently hitting the post, almost catching out Jones in goal.

Accolades for Kenny Jackett’s side however end there. The stats suggest that Pompey were in charge of the game, and dominant. It wouldn’t be fair to say that Jackett’s players didn’t create chances, as 17 shots were taken at Jones in between the sticks that afternoon. Chances however, don’t win games, and the brutal truth is that Portsmouth lacked the clinical finish in the final third. Wigan however, taking 3 shots on target, converted 2 of them.

The first goal came when Alex Perry’s shot was blocked by Sean Raggett, and the ball fell back to the path of Lee Evans who volleyed the ball into the net, past MacGillivray, who was already on the floor from the original effort. The Latics’ lead was largely attributed to a Solomon-Otabor cross, which was avoidable. The defence has to do better.

Wigan’s second goal was a free-kick into the roof of MacGillivray’s net from 30 yards out however, questions still need to be asked of the Scottish international in between the sticks.

The closest player to a man-of-the match performance was most likely second half substitution, Ellis Harrison, who came on to replace Marcus Harness. The striker gave Fratton Park late hope when Marquis knocked the ball down in the box for Harrison to bolt into the top corner with his left foot.

Fratton Park may be empty, yet the voices of the fans are louder than ever. It’s not unjust to say that the majority of the Pompey fanbase are collectively campaigning for a change. The fans have faith, and deep down, always will. Recent results and performances however, start to reach a degree of alarm bells, and one may wonder, whether the Eisner family ownership have enough experience and pluck to make a major decision in the boardroom. 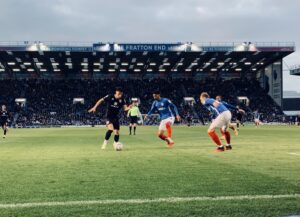